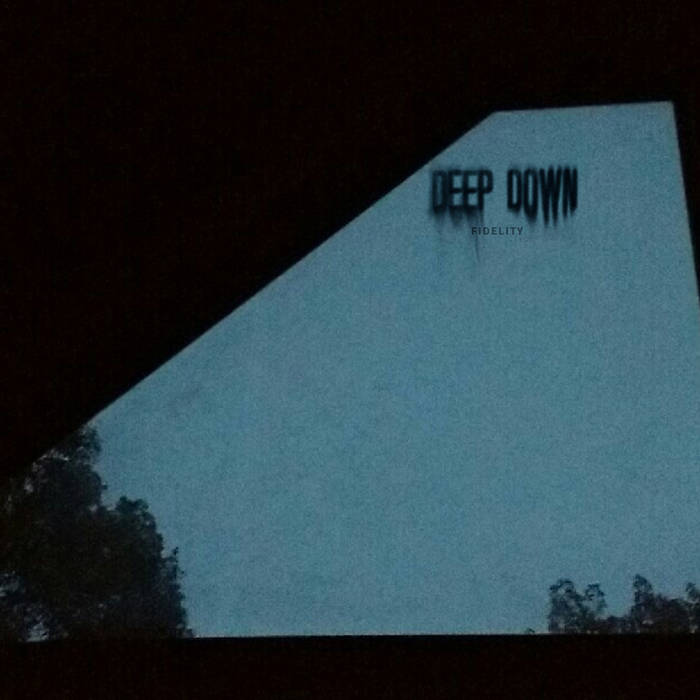 Fidelity by producer / songwriter Deep Down aka Roo

Statement of Transparency: The artist for this EP contacted me directly, asking me to give it a review, and even sent me a wonderful package in the mail containing a copy of the CD along with a very nice, personalized message. As such, this review reflects both a gratitude to the artist as well as my own musings that came about from my personal interaction with the album.

It's often assumed that we find the divine in what is pleasant in life. Putative godliness is often conflated with pleasure. What is physically or emotionally unpleasant, on the other hand, is considered to be bad, or in extreme cases, evil, and most feel that it should be avoided. Voltaire, after the Lisbon earthquake, broke with his optimistic worldview that we are living in an ideal world. After all, in what ideal world can there be so much meaningless pain, death and suffering? Voltaire found none of the arguments put forth by Christian apologists to be convincing.

Zen Buddhism on the other hand suggests that there is no contradiction. There is a divinity in all things, and that we only divide the world into good and bad as a result of our own ignorance of absolute reality. After all, what is unpleasant often turns out to be very good in the long run, while what can seem pleasant can turn out to have very unfortunate consequences. In general, we just don't know. Our mortal perspective is too limited. 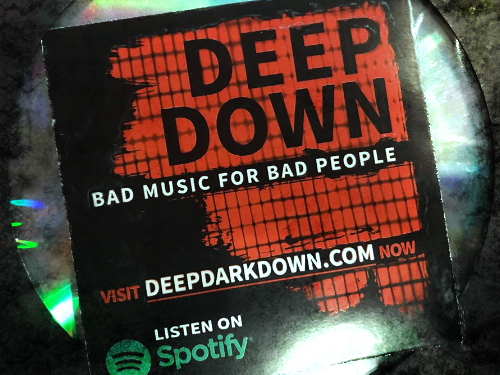 Thanks for the album, Roo!

Fidelity, a new album by producer and singer-songwriter Roo, here using the alias Deep Down, deals both lyrically and sonically with what is generally considered to be evil. The tag line for the album, “bad music for bad people,” suggests an album perhaps written for people like Charles Manson or the Marquis de Sade. But as Michael Jackson once asked: Who's bad? Really, a “bad person” is one living within illusion, unable to see how their idea of “good” is actually harmful to themselves and others. We become bad from circumstance, from the influence of the deluded people we grow up with. Because there are so many negative influences around we are all, in some way or another, bad people. We are flawed people who harm one another in little ways each and every day, whether we are conscious of it or not. Fidelity then tackles a theme which speaks to all of us.

From the loss of innocence, to a meditation on the apocalyptic consciousness of our times, DEEP DOWN crams a lot of sentiment and feeling into such a short EP – each of the four tracks is less than 4 minutes, with the entire EP clocking in at just around 10 minutes. Nevertheless, its creative production and evocative lyrics allow a lot to be said within its short playtime.

The EP is short, crisp, and bitter, with its abstract lyrics conveying more of a vague sense of anxiety and dread than any specific narrative. There is, however, something beautiful to be found at the heart of this EP, a plea for enlightenment within a dark tunnel, a sense of the divine amongst the smoky ashes of human feeling. The title, Fidelity, is ambiguous, and reaches out in multiple semantic directions. Fidelity of course is an important concept in the digital age, an area of interest for artist Roo, where most of what we see is a copy of something else. We live in a high fidelity age where everything from classical paintings to personal emotions are reproduced in high fidelity for global consumption. Moreover, fidelity could refer to the faithfulness of nostalgia, of coming back to a world and seeing that it has remained intact – which, almost innevitably, it has not. Idealization then kicks in, a reversion to an early mode of thinking, in order to escape, if not from the more challenging realities of real life, then from the challenging realities of our own cynical minds. Letter from Roo. RoO. Thanks Roo!

The artist himself cites genres such as noise, nu-metal, trap, and experimental hip-hop as prominent influences, and the sounds of groups like Death Grips and Nine Inch Nails definitely resonate within the EP. Although Roo claims his work no longer takes cues from avant-garde metal group Mr. Bungle, the frequent changes of texture and style in this EP definitely point to some lingering affinity. In general, the sound of Fidelity is extremely eclectic, taking some influence from a good portion of extant aggressive, high-energy music genres.

This first track, "...", consists of a narration given by a friend of the artist, an EMT, giving an account of a man losing his eyeball after being punched in the face. This detail starts the album on a rather morbid note. Like a good horror story, this opening narration reminds us that we are mortal, and that someday we will die. It's not necessarily a bad thing. Like in a Cormac McCarthy novel, we are made aware of the banality of violence. Good, bad – it's just the way it is sometimes.

The second track, "Exit Bag", which was previously featured on a compilation put together by noise label Brutal Resonance, gives us our first taste of Roo's vocal style. Breathy, anxious, and tormented, the vocals seem like a blend of Eminem's rapid verbiage, the whispering anxieties of nu-metal, and the surreal, noisy vocals of Death Grips. The production on the track is energetic and ominous, with the crunching synths giving it a bitter edge. Sirens and vocal distortions also pin-point the track in a very urban world, potentially a dystopian one tormented by the brute facts of ubiquitous violence, from which our only escape is through a death bag.

The lyrics also help paint an image of this nightmare-ish urban world. At one point, Roo talks about how he can never go home because “'cause it's all / washed down with the rain through a filth-clogged drain.” The lyrics are abound with a sense of a lost innocence, and a lost childhood. Perhaps through the naive eyes of a child, the clamour of urban / suburban life is given an aspect of wonder and joy, but as a cynical adult the city may just seem like a melting pot of suffering and moral degeneration.

The third track, "8ball", perhaps has the biggest Death Grips influence, with its strange, bizarre synth designs buzzing away beneath abstract, aggressive vocalizations. The lyrics give a sense of the pale dullness of a lot of our life on the internet, on social media. If the early modernist were concerned with the meaninglessness found in early 20th century life, they would certainly have occasion to laugh at the absurdity of the social media age. As Roo says, “you're no one, nothing, nevermind you design / new ways for us to waste our time.” So much of life on the internet is wasted time, and yet for some reason we keep going back to making the same jokes on twitter, or going over the same, worn arguments which ultimately have no solution. We seem to enjoy argument and doomsday prophesying for its own sake, or perhaps because it gives us a tenuous sense of identity within a cold, digital realm where we are able to perceive so clearly how little our personal identity matters. For many people, the idea that their personal identity is illusory and meaningless is extremely frightening, and they will claw and scrape in order to retain the illusion that they have a history, some concrete place in the context of this nebulous world, even if that means hurting and criticizing others, building an identity through exclusion.

Construction of Identity Online or Becoming a Person made of Words. Artist: Forest Muran, 2017 (that's me, this is me desperately cosntructing my identity)

Perhaps this obsession with identity comes from how much the social media age feeds our sense of ego. If television, like Andy Warhol once said, promised to give everyone their own 15-seconds of fame, the internet promises to give everyone the illusion of continuous fame, and affirmation of having a consistent identity. “I can't help you if you want it all,” Roo sings. Increasingly, people want the world – a great job, a nice car, a beautiful home, lots of social media followers, a beautiful lover, and opportunity to travel around the world. Even more than having these things, people want others to see them having these things. Of course, nothing ever goes as planned in life, and no person is able to arrange their material life to live up to a nebulous ideal. Nevertheless, everyone thinks fortune is on their side, and it will favour them. Social media gives us the ability to craft the appearance of an ideal material life, a world where money is always in abundance, people are always witty and creative, and couples never feel an ominous sense of competition and jealousy - a world where the 8ball is always right. While life can indeed gives us what we want, we can't be selfish.

The fourth and final track on the album, "broken glass", features production by South African musician Gilt. The slow, steady pace of this track and its minor melodic mode gives it the quality of an electric lullaby. The melodic focus and ringing, looming sine waves give the track an affinity to Carl Craig at his most introspective. The bleak contents of the lyrics perfectly compliment the loneliness in the production, with its somber, cave-dwelling harmonies and irregular, frantic kick pattern.

In this track Roo sings, in what is probably one of the most characteristic moments of the EP:

Even amongst the hot flames of a burning world, the divine can be found. I often talk about an apocalyptic sense being found in lots of art today. In many ways, because of looming ecological catastrophe, the increasingly destructive power of military arms, and increasing political divisiveness, many artists seem to think that we are living in the end times. Perhaps that should give you pause – what if you were part of the last generation of human beings to ever live? Would you be OK with that? Would you still be content to live a happy, peaceful life, or would you retaliate in confusion and frustration like a cornered animal?

The world most likely isn't ending. Even pain and suffering usually has a bright side, given enough time, and perhaps the apocalypse will be a veiled prelude to Utopia. Regardless of whether the world is truly ending or not, we will all experience our own personal apocalypses eventually. We will all die. That is just a part of life, and what is in life is essentially divine. God lives here, within everything, good or bad.

You can listen to Fidelity now on Bandcamp.

If you enjoyed this read, be sure to read my review of DJ Nizzy Nick's The Irony of Misused Energy