Recently, a friend of mine and I were discussing how the strange, nebulous vaporwave genre may be an attempt to aestheticize a sense of dystopia – the oppressive feeling that our past my have gone awry, and that we are living in an age destined for ultimate destruction. Political divisiveness, looming ecological catastrophe, and economic instability are ideas that haunt the public mind today, even if it doesn't occupy as conscious a place as what we're going to eat tonight, or who is dating who. Nevertheless, catastrophe and cynicism has come to define our times, and a lot of the most successful commercial products have capitalized on a mass desperation to go back in time to a more innocent age. Vaporware may be one facet of this trend, or it may be a more spiritually nourishing solution.

In this latest project by YZIN大火 (pronounced, I am told, as why-zin-blaze, although a proper pronunciation of the kanji would result in why-zin-taika), released earlier this month on August 18th through internet label Gumshoe, the Canadian producer shows us a more personal element to the dystopian psychological obsession. Act 1 - The Irony of Misused Energy blends vaporwave mood states with staple hip hop, plunderphonic, and ambient conventions, creating a very introspective soundworld that takes the listener on a personal journey through their own desire for a more innocent time, reframing our relationship with the past.

Right away, the first track puts us into a reflective mood. “A Nostalgic flashback begins”, starting with its driving, rumbling bass drum, and later introducing ambivalent synth sounds, has a hollow quality. The sighing synth voices in the background of the texture convey a sense of longing, and we quickly begin to feel a sense of deep, spiritual lack. Is it the absence of any true human voices? Or is it the quietly despairing soundscape? This sense of absence is a trend that continues throughout the album. Picture I snagged of the artist himself in 2017

The second track, “songb!rd く二-ジー-ソングバード”features perhaps the biggest vaporwave influence, with an easy-listening saxophone solo overlaying a repeating, tragic synth arpeggio loop. The glitch effects and sense of a remembered, though fragmented history on this track set the general tone for the remainder of the album.

The third track, “aka ドリーム-ブレード-ビーチ DREAM BLADE BEACH” evokes a sense of the primal, with its mysterious, morose reed ostinato. Haunting synth pads in the background give the track an absorbing, and somewhat comforting flavour in the midst of its overall strangeness. Every so often, an inverted minor chord arpeggio pops up in a synth line, sounding surprisingly optimistic, and grinds unapologetically against the more emotionally indifferent beat loop, in a very Aphex Twin-like way. 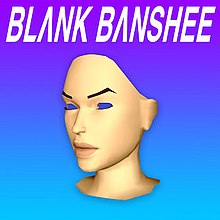 Blank Banshee 0, a prominent source for samples on the album

Over the course of the next few tracks, YZIN大火 explores a few different emotional states, ranging from paranoid to prophetic. Sampling from a large number of sources, including the videogame Chrono Cross and Blank Banshee's ouvre, the producer does what plunderphonic artists do best, and assembles something aesthetically new out of a recycled artistic history.

“No Emotion (2K18 lofi glitch edit)” throws a number of diverse samples together, producing an effect that sounds like something a computer might consider art, reinforcing the dystopian theme of the album. The track might even be suitable as a companion to a Philip K. Dick novel, with its intriguing confusion of human agency and algorithmic sounding composition. Although the track is titled “No Emotion,” there is a strange sense of elation to the track, like an artificial intelligence's attempt to reproduce its own understanding of the sublime.

The ninth track, “Sonic Boom lofi version” may be the most engaging track on the album, with its sardonic sounding synth line and exploration of different moods over a period of time. Listening to it though, I'm confused as to how much of the work is sampled and how much of it is the product of original inspiration. I'm reminded, however, that in the vaporwave genre, these kinds of details don't matter much. Ego rarely factors into good examples in the genre, since its greatest successes are largely a product of a dreamy ambiguity, outside of the realm of explicit agency. Who the author is doesn't matter so much as what the product is. Perhaps even the idea of a single agent producing a plunderphonic work is a misunderstanding – the genre might be better understood as a collaborative effort between numerous artists throughout space and time, coming together under the hand of one aesthetic organizer. 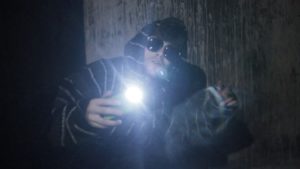 YZIN大火 crouching ominously in a dungeon

Overall, Act 1 - The Irony of Misused Energy is a reflective meditation on our longing for an idealized past. The present may seem hopeless, and the future may seem unfathomable, but we will always have the joyful memories of the past to comfort us. The true irony in this situation, however, is that trying to find pleasure in joyful memories of the past clouds those memories with a sense of loss and regret. The carefree days of riding on the swings after school, or intensely speculating on the seemingly limitless secrets in Super Mario Bros., or even the memories of a loved one's speech and gestures – we cloud over these joyful memories with our insistence on milking nostalgia, producing something far removed from the original experience. What was warm and joyful becomes cold and haunting. That seems to be the relationship to the past that YZIN大火 is exploring in his latest album.

The “irony of misused energy” is that, despite the ubiquitous criticisms offered by the billion judges of the world, no activity in life is ever wasted. We learn from everything, and no memory, pleasant or not, should be shunned. There is no misused energy. There is only what we will do with the energy we have so far acquired. But for YZIN大火, and for us all, we first need to make sense, to make a thing of beauty, of the past before we can see the true potential within it.